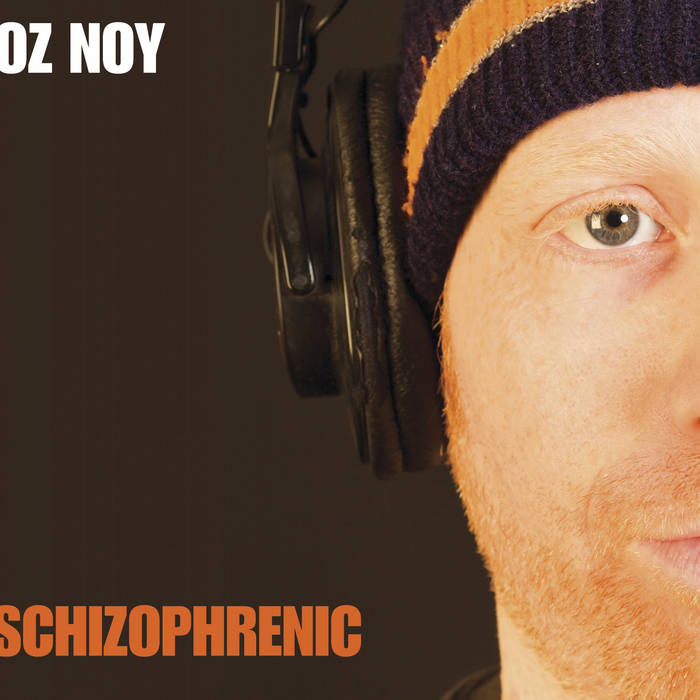 Oz Noy, one of the most proficient, fluid, and inventive contemporary instrumental guitarists in the U.S., unleashes the sonic equivalent of a turbo-charged luxury high-performance sports vehicle that hugs the highway while cruising in the fast lane.

With his new instrumental album Schizophrenic (Magnatude Records) –as off-the-hook as it is sophisticated – the native Israeli guitarist once again navigates the gnarly twist and turns of the metaphorical musical road.

Take a dash of Stevie Ray Vaughan, an ounce of Jimi Hendrix and an endless supply of wild sonic experimentation, precise musicianship and passionate soloing and you’ll come close to the sonic expansiveness of Schizophrenic.

As he had done with previous Magnatude studio efforts Ha! and Fuzzy, Noy combines a diversity of sounds and musical genres with a knack for jazz-based songwriting. The world-class precision guitarist motors past the competition (leaving it in his rearview) and ploughs over jagged musical terrain, setting a new precedent for his personal best.

“What has been happening with my records over the years is that, stylistically, I stopped worrying so much about what genre of music I was playing in,” says Noy. “Now I mix together whatever styles I want in my music. On Schizophrenic you’ll find one song with a reggae feel and the next an Al Green/R&B vibe. To me it’s all the same.”

In lesser hands this sprawling approach might completely fall apart or simply fall short of its mark. With Schizophrenic Noy manages to elevate, radiate, calibrate, translate, and articulate various creative musical concepts (i.e. structuring cyclical chord changes) through these nine, driving instrumentals. In short, Oz is all over the place but steers clear of aimless noodling.

Listen, for example, to the second track, “120 Heart Beats”, and you’ll hear how and why. Noy lulls you with a rockin’ instrumental that is reminiscent of the Dixie Dregs, Rolling Stones and Stevie Ray all rolled up into one, while guest guitarist, L.A. session great Steve Lukather tears the roof off the joint at the song’s climax.

“I’ve got to say that Lukather plays the baddest guitar solo at the end of ‘120 Heart Beats,” says Noy. “I wrote the rock groove, and it was so cool I had to design the entire song and the rock riff I play around it. There’s a lot of colors on this album.”

Color is an understatement. As the title implies, Schizophrenic crosses and blurs the line between stylistically distinct genres while combining multiple musical characteristics such as funk, blues-rock, blues-rock with jazz-chord inflections, screamin’ guitar rock, and slow jazzy-rock ballads in odd time signatures.

Adding rich tones to the sonic picture, Noy extracts a multitude of textures from his Fender Stratocaster electric guitar (and his assorted gear and effects) both by using a pick and his fingers in songs “Ice Pick”, “Jelly Blue”, “Bug Out”, “120 Heart Beats”, “Elephant Walk”, “Twice In A While”, “Seven” and the aptly named title track, a tune that puts the entire record in perspective.

“I called the song ‘Schizophrenic’ because there’s a funk part and then a kind of heavy metal section,” says Noy. “I developed the ideas and combined them into one song.”

“‘Schizophrenic” was fun to play,” offers drummer Keith Carlock, who counts James Taylor, Steely Dan and Sting among his employers past and present. “It has a James Brown kind of groove that goes in and out of a bashing rock riff. It’s all over the place stylistically, hence the perfect title. On the recording, Anton Fig is playing the rock sections … and we trade other parts of the tune, including the solo at the very end over the vamp.”

Noy, who has worked with numerous singer-songwriters (both in the U.S. and Israel), has become quite a composer and sonic experimentalist, having learned to synthesize his influences and inspirations to make meaningful and quite mysterious musical statements. For example, the aquatic and luminescent jazzy instrumental “Underwater Romance” quietly bursts with electronica-esque sonic bubbles that percolate like ocean-floor volcanic activity, taking us on a deep-blue journey to parts unexplored and unknown.

“I use whatever equipment gets the job done and write whatever music I feel I can and should,” says Noy. “Most of the times, initially, I usually don’t have a grand plan about what it is I’m writing.”

“I think everybody plays their asses off for this record,” says Noy. “This music requires just the right balance and a certain type of musician. If you take a really good rock player or R&B player who doesn’t have the jazz vocabulary to stretch the music, then it’s going to be boring. The opposite is true, too. If you get a jazz guy who doesn’t have the rock or R&B pocket, then it’s not going to sound good either.”

Where did Noy gain his lust for diversity and how did he become so musically, well, schizophrenic? A look into his past might reveal much about his current musical direction. For starters, Noy, who was introduced to jazz-rock fusion (Chick Corea, George Benson, Al DiMeola, Keith Jarrett) through his older brother (Noy has four brothers), initially wanted to be a drummer. But after a boyhood friend began taking guitar lessons, Noy’s interest was piqued and he soon was hooked on the six-string instrument. It wouldn’t be long before Noy turned from amateur to professional. Incredibly, by the time he was 13 years old, Noy was working as a session player in Israel, contributing to various high-profile recording dates.

By the 1990s, Noy had formed a jazz trio in his native Israel with which he performed Jimi Hendrix, Wes Montgomery, and Stevie Ray Vaughan tunes and eventually incorporated funky instrumental versions of James Brown and Stevie Wonder songs.

“I really played a mix of blues and funk and started to play with whatever jazz vocabulary I had,” says Noy. “I was beginning to see that there were no boundaries and we could go wherever we wanted with the music.”

When Noy migrated to the States in 1996 to broaden his personal and musical horizons, the guitarist cemented his career path as a solo artist. As Noy became more active on the New York music scene, he rubbed elbows with some of the City’s most happening musicians, from drummers Anton Fig and Keith Carlock to bassists Reggie Washington, Will Lee and James Genus, performing shows at Small’s and the legendary The Bitter End.

The Bitter End became a pivotal scene for Noy, as he developed a following, made a name for himself, and won over fans, critics and prospective employers alike. (Noy still plays regularly at the Greenwich Village venue.)

“Oz and I moved to town around the same time and I played in The Bitter End house band on the Sundays Oz performed,” says native Mississippian Keith Carlock. “I remember Oz sitting in and blowing everyone away. A few years later when he started gigging under his name, I was one of the drummers who got the call and we’ve been playing off and on ever since.”

Once Noy found his footing he began recording solo material as a way to measure his growth and win gigs at various venues around Manhattan. On one 1998 demo/independently produced self-titled CD, Noy shows shades of the schizophrenic sophistication that defines his current music. Instrumental covers of John Coltrane’s “Naima”, Stevie Wonder’s “Ribbon In the Sky”, Michael Jackson’s “Rock With You” and The Bee Gees’ “Love You Inside Out” sit side-by-side with raw, brassy and slick originals such as “The Way She Moves”, “The Morning After” and “Touched By the Moon.”

Noy has consistently been a musical seeker, tweaking his guitar playing and songwriting throughout his career, and his hard work and talent has not gone unnoticed. By the mid 2000s Noy had signed to Magna Carta’s Magnatude Records and released two studio albums (Fuzzy, Ha!) and the in-concert recording, Oz-Live (recorded over four nights at Noy’s beloved venue, The Bitter End, in 2002).

In a way, Schizophrenic is the culmination of all that Noy has been wanting to express throughout his career – it’s all here, making cohesive sense of the musical chaos that is the guitarist’s artistic orientation.

“This is only the beginning, and Oz has a lot more to say, I’m sure,” says Carlock.

“I’m a jazz player at heart,” says Noy. “The key is knowing how to play it, write it, and how to introduce your sound and identity within a song without ruining it. If I can do that then I think I’ve accomplished something.”

Bandcamp Daily  your guide to the world of Bandcamp